Marvin graduated Temple University with a degree in Health and Physical Education in 1950 after serving in the US Navy in World War II. Marvin was a Health and Phys Ed. teacher in the Philadelphia area for 20 years. He became co- director of Pine Forest Camp, started by his parents , and co-founder of Camp Timber Tops and Lake Owego Camp. These three all –around children’s resident summer camps are located in the mountains of Northeastern, Pennsylvania and welcome children from across the country and the world. Celebrating 83rd consecutive years of operation this summer, it is one of the oldest camp organization in the United States under continuous family ownership.

Over the years Marvin hired many Temple graduates as counselors and activity heads. Two of the programs that he is most proud of he created in conjunction with Temple Alum. In 1973 Arnold Dort built one of the first outdoor ropes adventure courses in the United Sates at Timber Tops with Marvin’s encouragement and support. And the Pine Forest Football and Cheerleading camps were begun when Marvin gave an opportunity to Temple alumni and former football player Jerry Preschutti. Today, Jerry Preschutti’s Pine Forest Cheerleading Camp is one of the largest in the country.

Marvin is a very active Temple Alumni. He continues to mentor future health professions to become camp directors and educators through his association with
AMSKier, insurer of America’s great camps. Having served on the National Board of the American Camp Association and as Past President of Private Independent Camps he remains an active and inspirational leader in the camping profession. 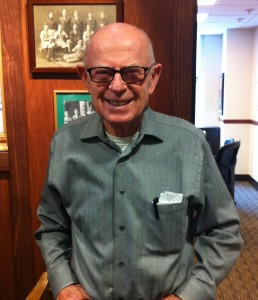